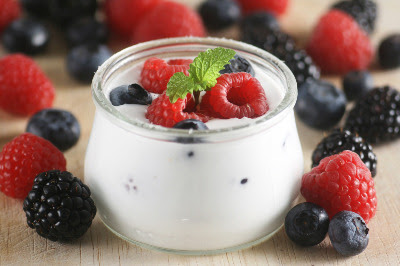 Yogurt contains the probiotics (such as Lactobacillus bulgaricus and Streptococcus thermophilus). Which are very helpful for the health. Most of the people have a misconception that bacteria is lethal to health but its not true. There are some bacteria which are good and helpful and these are found the yogurt.Taking the yogurt daily can help you to live a very healthy life. Yogurt is also a good source of calcium, potassium and protein as well.

Those people who are lactose intolerant can enjoy the Yogurt. Usually the patient of Lactose Intolerance can't digest the Lactose present in the mil. The yogurt contains very low amount of this carbohydrate and causes no issues. Lactose is an important part of our food and have beneficial effects in the digestive tract. It is mainly required by the children but the adults as well. During the fermentation 25-30% lactose is converted in Lactic acid - making it favorable for the Lactose intolerant patients.

Milk proteins have high nutritional values due to their biochemical composition. The proteins in the milk are of high quality such as α-lactalbumin and β-lactoglobulin. Proteins content of fermented milk such as yogurt increases typically 2-3%. The amount of soluble proteins and free amino acids increases in the yogurt. Lactic acid bacteria require amino acids that's why they break down proteins for their proteolytic activity. Proteins in the digested milk are reported to be completely digestible.

Gastrointestinal cavity is full of microflora. There are good and bad also. There must be a balance in both of them. Balance is disturbed when we take antibiotics or due to illness. Yogurt is known to be a good antimicrobial. the Lactic acid bacteria lowers the pH of the gastrointestinal cavity which acts as bactericidal. Some species of the Lactic acid producing bacteria also produces the hydrogen peroxide which is also a very good bactericidal chemical.

Study shows that the cancer is caused mainly due to the environmental factors, most chiefly the food which we eat. Bacteria sometimes also plays its role in cancer. Lactobacillus found in fermented milk cause the deconjugation of the bile acids and lowering of the body sterol pool. Conjugate bile is reported to enhance the absorption of cholesterol.  Additional research is needed on possible hypocholesterolaemic effect of yogurt.

The metabolic activity of small intestine is same as the liver. Due to the presence of many microflora in the intestine, they can also cause infection and illness to the victim. Due the antimicrobial activity of the yogurt which is discussed above, kill the harmful bacteria in intestine and helps the immunes system.These lactic acid producing bacteria found in yogurt are known as natural killers because they kill the harmful bacteria.

Yogurt is trusted as a part of perfect diet from ancient times. It is found that eating yogurt is more beneficial then in evening. So try to make it the part of your daily breakfast and enjoy a very healthy life.