7 benefits of honey - the liquid gold 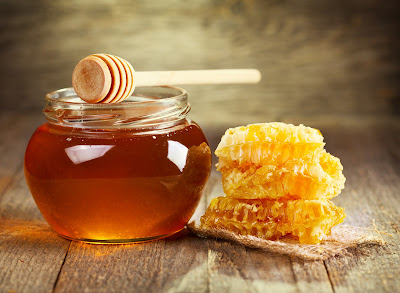 Honey is mostly compose of carbohydrates up to 82%. The carbohydrates present are monosaccharides fructose , glucose, disaccharides, sucrose, maltose, isomaltose, maltulose, turanose and kojibiose. There are also some large carbohydrates also presents such as oligosaccharides including erlose, theanderose and panose, formed from incomplete breakdown of the higher saccharides present in nectar and honeydew. The rest of honey is compose of protein, amino acid, vitamin, minerals and antioxidant. It also contains numerous amount of enzymes also which help in increasing the metabolic process these enzymes are Invertase, glucose oxidase and hydrogen peroxide catalase. Honey contains 18 different type of amino acid in which the most abundant is 'Proline'. Honey is rich in vitamins it contain trace amount of vitamin B, B6, riboflavin, niacin, folic acid, pantothenic acid and vitamin C. The minerals present in honey are minerals calcium, iron, zinc, potassium, phosphorous, magnesium, selenium, chromium and manganese. The main groups of antioxidant present in honey are the flavonoid. The general perception is that as dark the honey is it contains more amount of honey.

In numerous studies, honey has been found effective in treating wounds.  Honey is very effective against the resistance bacteria such as Staphylococcus aureus, salmonella and E. coli . even it helps in reducing the pain . For the treatment of burns and wounds,  Honey is applied directly or in a dressing which is usually changed every 24 to 48 hours. When used directly, 15 mL to 30 mL of honey has been applied every 12 to 48 hours, and covered with sterile gauze and bandages or a polyurethane dressing.
Clinically, topical honey treatment has been shown to have many key actions:

According to research done in 2007, 105 children aged 2–18 years with cough as a feature of an upper respiratory tract infection were trial recruited. Few children were injected with syringe full of honey and other were not. The children's parents then reported via a telephone survey on their child's cough and sleep disturbance. These observations were compared with those taken the night prior to treatment. This showed much improved cough and sleep quality from the previous night and this was especially the case in the honey group. The researchers concluded that “honey was the most effective treatment for all of the outcomes related to cough, child sleep and parent sleep.”

According to the 'National Honey Board', honey contains small amounts of a wide array of vitamins and minerals, including niacin, riboflavin, pantothenic acid, calcium, copper, iron, magnesium, manganese, phosphorus, potassium and zinc.

The sweet nectar is loaded in antioxidants that may help prevent cellular damage and loss within the brain. By taking 20 grams of honey a day, the women could more likely to have better short-term memory than their counterparts who took hormone pills. Honey’s ability to help the body absorb calcium, helps aid brain health. The brain needs calcium in order to process thought and make decisions.

A 2001 study involving patients with chronic seborrheic dermatitis and dandruff published in European Journal of Medical Research the patients were asked to apply honey diluted with 10 percent warm water to their problem areas and leave it on for three hours before rinsing with warm water. In all of the patients, itching was relieved and scaling disappeared within one week. Skin lesions were completely healed within two weeks, and patients showed subjective improvement in hair loss as well. And when applied weekly thereafter for six months, patients showed no sign of relapse.

According to Mayo Clinic the honey can be a promising factor for those who face the problem of low white blood cell count during the chemotherapy. A small trial was done , 40 percent of cancer patients who were know to be at the risk of neutropenia (very low blood count)  had no further episodes of the condition after taking two teaspoons daily of therapeutic honey during chemotherapy.