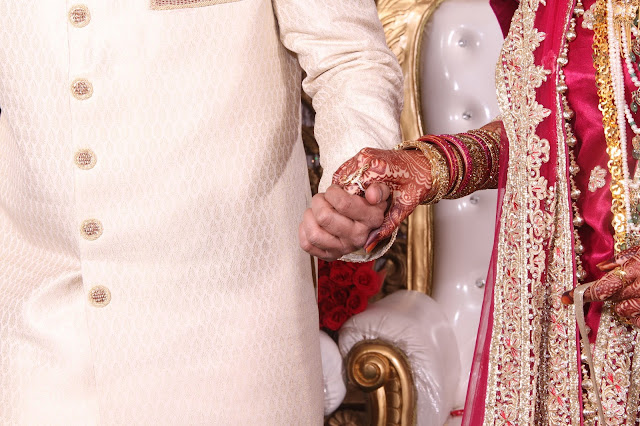 Marriage is the legal or religious ceremony that formalizes the decision of two people to live as a married couple, including the accompanying social festivals. Actually, Marriage, Wedding, Nuptials are terms for the ceremony uniting couples in a wedlock.

Pakistan is a muslim country in South Asia and has a rich culture, customs and traditions. Religion is the most essential factor of Pakistani weddings. They are celebrated with great fun and exciting events with glamor, people wearing fancy clothes, merriment, a tasty wedding food menu, music, families getting together and everyone is in the mood to party. Pakistani marriages are a mix of different rituals, a lengthy process from pre-engagement festivities to the Walima.

It is important to know that some of the customs followed in Pakistani weddings are not found in Islam. They may be adopted from Hindu culture since Muslims and Hindus have lived together for many years before the partition of Pakistan, in 1947.

It is the first step in getting married after a proposal acceptance. It can be a small or a large family gathering depending on the choice of groom and bride's families. In this ceremony, rings are commonly exchanged between the couples, it is the symbol of acceptance of the proposal. It is a formal party in which religious quotes from the Holy Quran and prayers are recited for the couple and the date for the wedding is decided. A formal dinner or a tea party are arranged for the guests according to the ceremony timings.

Dholki is taken from playing an instrument dholak means drum beating. Dholki is an event in which women would gather during the week of wedding days in the groom's and bride's house separately for preparing the dance for the mehndi event, playing dholak and to sing old traditional wedding melodies.
Uptan is a paste that is made from turmeric, sandalwood powder, herbs and aromatic oils, which the groom’s mother brings for the bride. These day, both uptan and dholki are held on the same day.

Nikah ceremony is the major and the virtuous occasion in the marriage process, without which, a marriage is not considered a marriage. Nikah is an Islamic act, where the bride and groom sign a marriage contract known as nikah naama (documents of contract) and form an everlasting relationship between two people on the basis of two words, “I accept”, said three time by each of them, followed by the recital of Quranic Surahs and the man takes a woman in his nikah and accepts her as his soul mate in the presence of Almighty Allah. A dua is then made y everyone for the married couple’s future . Walis or witnesses on both sides must be present during nikah, and the fathers of the bride and groom act as walis.
Nikah usually takes place at the bride’s home. It is attended by close family members, relatives, and friends of groom and bride. Mostly, the men and women are made to sit separately, in a different room. Nowadays nikah ceremony is preferred to be held before mehndi function and other pre-celebrations or sometimes according to old tradition before the Barat ceremony. 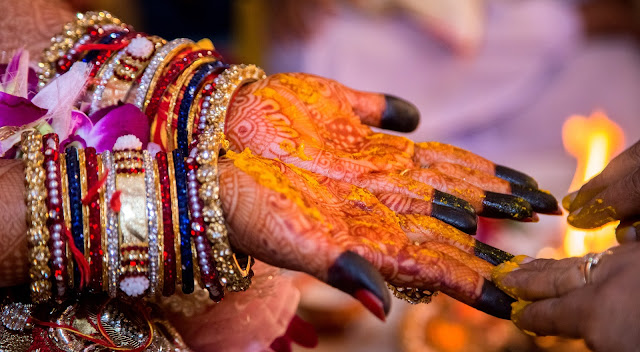 Yellow, green and combination of rainbow colors dress or mughal tradition themed dresses are the trend in mehndi functions. This event takes place a day before the wedding. In old traditions, only female members of both the families can join at bride's home and apply traditional mehndi or henna on bride's hands but now the trend has changed. Most urban side functions are organized at wedding hall or hotel, in which both side females and males participate in celebrations.
The most popular quote about mehndi that I've heard, according to south asian grandmothers is,

''The darker your mehndi is, the more your mother-in-law will love you. ''

Now a days the groom’s family brings henna and sweets to the stage and apply a bit of henna on both the bride and groom's palms. I A tinge of oil is also dabbed into bride's hair after which both are fed with asian sweets. Relatives present her with money soon after, which symbolizes the warding off of the evil eye.

Barat is another major function of the wedding, in which procession (janj) travel toward the bride's home or where the bride's family has organized this event. Before going off to the bride’s home, the groom’s close relatives would get together at his parents’ house and help him tie the flower veil called “sehra” on his head. This ceremony is called ''sehra bundi''. Groom arrives at the ceremony on a horse carriage or in a flower decorated car with relatives, friends and family along with a band playing songs or the dhol. The bride's family gives a warm welcome to the groom's family while throwing rose petals. Bride mostly wears a red color dress on barat day, and groom wears a sherwani, a traditional dress of Pakistan.

Different traditions are performed on barat day like joota chupai (shoe hiding) which is a playful tradition where the bride’s sisters and friends ‘steal’ the groom’s shoe, and demands money in exchange for it. Another fun tradition is the dhood pilae (feeding milk), in which the sisters of the bride feeds the groom some milk from a decorated cup, again for money. After the groom drinks the milk, he’s supposed to fill up the cup of milk with money and give it back to his sister-in-law. All these traditions makes a wedding ceremony colorful and joyful.

The important part of barat is rukhsati. Rukhsati will take place once the dinner or lunch has been completed.  The bride will leave her home with the groom and his family. This becomes a very emotional moment as the daughter is moving from one family to another. The Quran is held above her head as a blessing. Although this practice is not in Islam, a lot of Pakistani families have come to adopt it.

This event is organized by the groom's family and invites all of the bride's family and their guests to their home for a feast. It is a sunnah and the second of the two traditional parts of an Islamic wedding.The Groom normally wears a formal western suit or a tuxedo on this event and the bride will wear a dazzling dress with jewellery provided by the groom. The wedding officially ends after walima. At this ceremony, the bride and the groom are formally and publicly show cased as a married couple.

Wedding customs and traditions in Pakistan are entertaining not only for the families and close relatives, but all the friends and other guests as well. You only marry once and Pakistanis sure know how to celebrate a wedding.